Fears about the ongoing coronavirus epidemic have contributed to a decline in Asia’s stock markets on Tuesday.

China’s health authorities said on Tuesday that the new coronavirus has killed up to 106 people and infected 4,515.

“What’s becoming a bit clear is that the Chinese economy will get a hit for a time, e.g., travel and tourism is being effected in China, in Asia and elsewhere, including in Australia where the inbound tourism market by Chinese is the largest market in exports of personal tourism and education,” said the director of National Australia Bank David de Garis in a written note on Tuesday.

“To the extent that we’re still witnessing exponential growth in the people that have contracted with virus and people that have died from it, I think the cruise companies and the bigger travel companies are gonna have to be very cautious, as no potential end in sight,” said James Hardiman, managing director of equities at Wedbush Securities, to CNBC’s “Squawk Box” on Tuesday.

“In the close term, beyond only travel in and around China, my concern would be that all of these media confirmations … would eventually begin to … put some downward strain on overall travel bookings outside of China even among Western consumers, and I see there’s some evidence that … at least very near term, that’s likely to take place,” Hardiman said on CNBC’s “Squawk Box.” 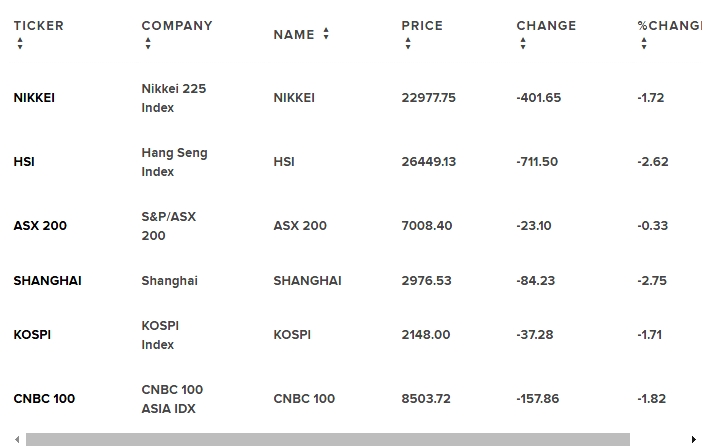 Oil prices were changing in the afternoon of Asian trading hours, with international benchmark Brent crude futures plunging fractionally to $59.27 per barrel. The U.S. crude futures, on the flip side, rose slightly to $53.17 per barrel.

The U.S. dollar index, which eyes the greenback versus a basket of its peers, was last at 97.954 after observing levels below 97.6 last week.

The Japanese yen, often regarded as a safe-haven currency in times of economic instability, traded at 109.04 against the dollar after reaching an earlier high of 108.81. The Australian dollar improved hands at $0.6760 after touching a previous low of $0.6744.