This text will be replaced with a player.

For the viewers’ ease, now a mere tap on the screen lets you watch Bloomberg Live Stream over the internet. So, you can get in touch with programs as per the TV schedule.

The news team of the Television network consists of talented people with academic and professional backgrounds in journalism. The crew members bring exclusive business stories and the latest capital market ideas, and also focus the investigative reporting behind the issues.

The network has a team that includes both seniors and newcomers. Some of the most popular anchors and reports are Tom Keene, David Rubenstein, Emily chang, Jonathan Ferro, David Westin, and Francine Lacqua.

Bloomberg Television – or shortly the Bloomberg – is an American cable and satellite TV, dedicated to air 24-hour business and capital market updates.

The TV is owned by Bloomberg L.P., and it is distributed globally, reaching over 435 million homes worldwide in more than 200 countries and territories.

How do I contact Bloomberg TV?
The network can be contacted for questions, complaints, or comments about the news coverage.

Viewers and readers can send an email at [email protected] to contact the newsroom Standard Editor.

Does Bloomberg accept press releases?
Yes, you can submit a press release to the network’s news staff at the following addresses:

For Asia, go to [email protected]

For Australia, go to [email protected]

What channel is Bloomberg on Roku?
After you’ve activated the channel, you’ll be automatically taken to the live broadcast of the network. You have to make use of the * button on the back of the Roku remote to access all the video-on-demand content.

The * button enables you to search for content or change your location. Additionally, there’s a sign-in option available to connect your Roku Channel to the Bloomberg App on your Android or iOS device.

Is Bloomberg available on Google TV?
The network has a streaming service, which is accessible on specific platforms, including Amazon Fire TV, Apple TV, Android TV, Samsung Smart TV, and Roku.
Does Bloomberg air political programming?
The network’s website has a separate section that’s dedicated to displaying political news and data.

Moreover, there are shows such as “Balance of Power,” which covers the intersection of politics and business.

How is Bloomberg helping traders?
The network’s shows & programs help traders make quicker and greater decisions through a steady stream of insight and information.

Initial Breakthroughs
Go back to stream

The Bloomberg Surveillance team dives into the depth of top business stories of the day and brings an insight into global markets. They root out the real cause behind the issues such as why the markets are pricing at higher rates, or where could money from a trillion-dollar spending bill go?

The show is currently hosted by a pro team led by Tom Keene and co-hosted by Lisa Abramowicz and Jonathan Ferro.

Keene graduated from the Rochester Institute of Technology. He’s a member and a Chartered Financial Analyst at the CFA Institute. In addition to his services on “Bloomberg Surveillance,” he provides investment and economic perspective to the station and its various news divisions.

He created the article “Chart of the day,” featured on the Professional Services section of the official website. He’s editor of the 2005 book “Flying on One Engine: The Bloomberg Book of Master Market Economists.

A philanthropist, a financer, and a co-founder of Carlyle Group, David Rubenstein is a prestigious anchor on Bloomberg TV. In his show, he talks with a high-profile roster of successful investors, who share their key investment strategies and tactics.

From a long ago, Rubenstein has been acting as a leader in Patriotic Philanthropy, having made valuable gifts during disasters and for the restoration of several places of national interest such as the Mount Vernon, the Washington Monument, Arlington House, and the Library of Congress.

A law graduate from Duke University, Rubenstein has written multiple books, including “The American Story: Conversations with Master Historians” and “How to Lead: Wisdom from the World’s Greatest CEOs, Founders, and Game Changers.”

Aired weekdays at 5pm ET from the network’s studio in San Francisco, Bloomberg Technology is exclusively focused on the technology & innovation impact on the future of businesses.

Emily Chang is the executive producer and anchor for the show. She reports on global media and technology companies and the startups that may grow to them. She regularly does conversations with top tech executives, entrepreneurs, and investors. Mark Zuckerberg. Aaron Sorkin. Bob Iger. Jack Ma. Chang has interviewed them all and many more.

Born and raised in Kailua, Hawaii, Chang is a graduate of Harvard University. She began her career as a news producer at NBC, New York.

Chang was a CNN correspondent at Beijing before she joined Bloomberg in 2010. While she was at CNN, she reported on the 2008 Olympics, the nuclear ambitions of North Korea, and President Obama’s arrival to Asia.

Chang was once a CNN reporter in London, where her job was to cover the international stories for the CNN program, “American Morning.”

In 2007, she was serving as a reporter for NBC’s affiliate “KNSD,” San Diego, California. There, she won five regional Emmy Awards for organizing reports for MSNBC.

Aired on weekdays at 9am ET, “Bloomberg Markets: The Open” guides you through insight and expert analysis of Jonathan Ferro, the host for the show.

Ferro is a Radio and Television personality from the United Kingdom, serving at the TV in New York City as an anchor of the program and at Radio as a co-presenter of “Bloomberg Surveillance.“

He also anchors the daily radio program “The Cable” and a weekly show “Bloomberg Real Yield.” Before his current position, he was based in the network’s European headquarters in London, where he used to present “On The Move.”

With a Master in International Political Economy from Warwick University, Ferro has the privilege to interview various Federal Reserve officials and influential business chiefs, including the CEOs of Shell and Adidas, and the Chairmen of Barclays and HSBC.

David Westin, the show’s host, sits along with experts to talk about the week’s biggest issues related to finance and economics. The show airs every Friday night on the network

Before a career in Bloomberg TV, Westin was the ABC News President from 1997 to 2010 and used to oversee the station’s global coverage, including the 9/11 attacks, the wars in Iraq and Afghanistan, the 2008 economic crisis, and their aftermath.

Go back to top

1-Launch of a graphics package:

The network – in January 2009 – debuted a new graphics package. Before the new graphics applied to all of the network’s programs, they were first used and checked on the now-defunct pre-market program, “Starting Bell.”

3-Launch of another graphics package:

In October 2009, the television debuted another fresh graphics package, which provided an even better viewing experience.

4-Strategic relations with other stations:

Bloomberg TV – in 2011 – announced a strategic finance relationship with Gas Station TV. This was done to deliver personal finance and business news to over 27 million watchers each month at GSTV pumps.

The television launched the high definition simulcast feed on May 9th, 2011. The Time Warner Cable was the first provider to this HD simulcast.

In mid-April 2013, DirecTV began broadcasting the Bloomberg HD. This resulted in an increased audience share worldwide.

Since July 2014, the network’s standard-definition feed appears on a down-scaled version of its native high definition feed. Its 16:9 letterbox picture shows on a 4:3 SD feed. 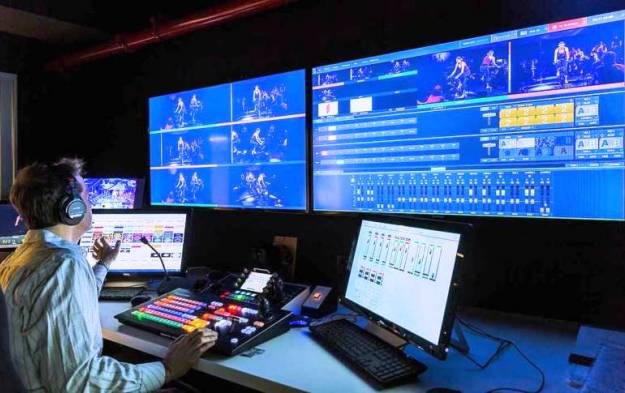 The live broadcast of Bloomberg TV is accessible worldwide. It is now reaching an estimated 310 million globally.

Today, viewers can tune in to watch Bloomberg TV Live Stream by simply visiting the channel’s official website, as well as on a wide variety of free and paid online platforms.

The opportunity to stream the business network at any moment of the day is good news for the viewers in the U.S. and viewers in most parts of the world.

While the digital offering of the channel is comprehensive, they haven’t forgotten about traditional formats and are enhancing the brand’s media technology assets by their launching localized versions all over the world.

Since March 9th, 2009, the channel decides to utilize its existing international production teams in Europe, Hong Kong (Bloomberg Asia) and America. This was intended to add a more global feel to Bloomberg Television.

As of October 2017, Bloomberg ranked third in Marketing Interactive annual survey of Hong Kong’s top TV channels, taking the lead ahead of giants like CNBC, CNN, and BBC.

The Bloomberg Europe headquarters in London has been described as the world’s most sustainable office building by renowned assessment experts “BREEAM.” Bloomberg London, the channel’s European HQ are also scooped the 2018 RIBA Stirling Prize.

The US broadcasts of the television are directed by Justin B. Smith, the CEO of Bloomberg Media Group. Smith replaced Andy Lack, who later joined the NBC News and became chairman of it.

Go back to stream