Home U.S. Iran ‘appears to be standing down’, says Trump

President of the United States, Mr Trump has said this Wednesday that Iran “appears to be standing down.” The statement came after Iran targeted nearly two U.S. bases in Iraq in retaliation for the U.S. assassinating of Gen. Qasem Soleimani. 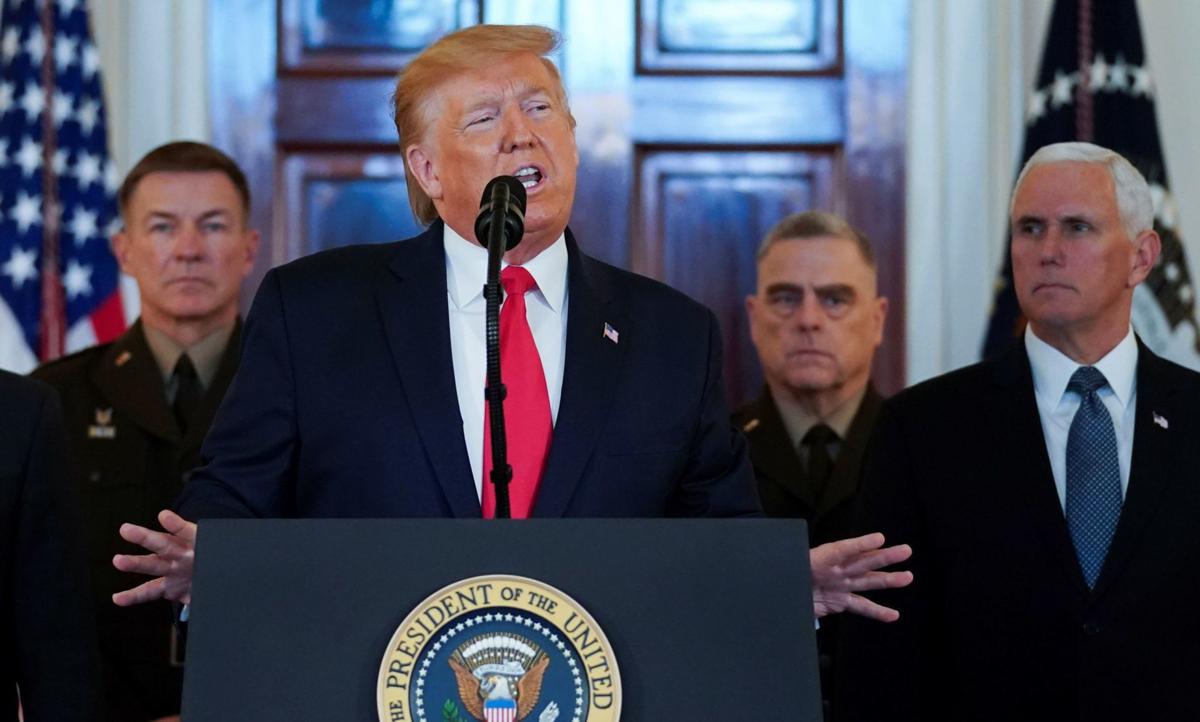 The U.S. will take some time looking at its options, and will “straightaway impose additional punishing economic sanctions on the Iranian regime,” said President Trump.

In his statement on Wednesday, Jan. 7th, Trump has repeatedly asserted that Tehran must abandon its nuclear programs, vowing: “As long as I’m president of the United States, Iran will never be allowed to build a nuclear weapon.”
The U.S. President revealed a gesture of harmony, too, saying that the United States is still open to negotiations with Tehran.
“We must work together toward making an agreement with Iran that makes the world as a safer and more peaceful place,” Mr Trump said.

Trump called other world powers to withdraw from the Obama-time nuclear deal with Tehran and work out a new one.

The President of the United States, while speaking from the grand foyer of the White House, confirmed no Americans were harmed in Tuesday’s night missiles attacks by Iran on two U.S. bases in Iraq. Trump defended his administration’s judgment last week to attack Soleimani, saying the general’s “hands were drenched in both American and Iranian blood.”

Hours later the Trump’s announcement a U.S. military’s top general told reporters at Pentagon that Iran fired over a dozen missiles with the intent “to kill personnel.”
Gen. Mark Milley, the Chairman of Joint Chiefs of Staff, praised early warning systems, which warned about the incoming ballistic missiles well in advance, allowing the U.S. and allied forces enough time to take shelter at both bases.
The general described the damage to parking lots, tents and a helicopter, among other things, as “nothing major.”

President this Wednesday at the grand foyer of the White House was accompanied by Vice President Mike Pence, State Secretary Mike Pompeo, Marker Esper the Defense Secretary and other top officers of the U.S. military branches.
The President spoke for nearly ten minutes and took no questions.

Iran last night fired about a dozen missiles from its territory, targeting two military bases at Iraq housing the U.S. troops and soldiers of coalition forces.
Corps of Iranian Revolutionary Guards described the attacks as the beginning of “fierce revenge” in condemnation of the U.S. killing of Gen. Soleimani, whom the Trump administration alleges had planned offenses that were only “days” away from execution.

In his speech amid the Tuesday missiles attacks, Iran Supreme leader Ayatollah Ali Khamenei called the barrage a “slap on the face” of the U.S. government.
“They were slapped last night, but such military actions are not enough,” Khomeini tweeted Wednesday.

They were slapped last night, but such military actions are not enough. #AlAssadBase

Iranian Foreign Minister Javad Zarif responded in a different tone, tweeting that Iran “took and concluded proportionate measures” against the assassination of Qasem Soleimani. He added that “We do not seek escalation, or war, but will defend ourselves against any aggression.”

Iran took & concluded proportionate measures in self-defense under Article 51 of UN Charter targeting base from which cowardly armed attack against our citizens & senior officials were launched.

We do not seek escalation or war, but will defend ourselves against any aggression.

Trump – after the attacks being made on U.S. bases in Iraq – didn’t state any formal address, but wrote in a tweet that “all is well!”
“Missiles launched from Iran at two military bases located in Iraq … I will be making a statement tomorrow morning,” Trump tweeted.

Hours before Iran launched missiles attacks, the U.S. Secretary of Defense Mark Esper demonstrated that they do not want war with Tehran. He said, “We are not looking to begin a war with the Islamic State, but we’re ready to finish one.” Esper added that Washington likes to see the situation de-escalate.
Earlier Tuesday, secretary state Michael R. Pompeo said the U.S. “got it right” by killing general Soleimani.
“It was the right decision. The Department of Defense did an excellent job … that fits perfectly within our strategy in how to counter the threat of malign activity from Iran more widely,” Pompeo told reporters at the State Department.

“There is still a lot of buzz about attacks last night, but the fact there appear to be no causalities and that Iran provided defining language around the strike by cautioning the U.S. not to respond, and the fact that President Trump took a night to access what was going on, gives the probability that there is an off-ramp, said Michelle Dover, director of programs at Ploughshares Fund foundation.

Tensions between Washington and Tehran started to mount after President Trump backed away from the landmark Iran nuclear agreement signed in the Obama administration.

On Sunday, Iran declared it would not abide by any of the limits enforced in the nuclear deal on the amount of uranium enrichment centrifuges.
Iran last may also stop complying with some commitments in the nuclear agreement after President Trump in 2018 withdrew from the deal. Donald Trump also re-implemented sanctions on Tehran that had been previously lifted in accordance with the 2018 deal.

The last year was marked by heightened geopolitical disturbance including numerous attacks on tankers and oil facilities blamed on Tehran, Iran’s suspected attack that cut Saudi Arabian oil production in half, the Iranian downing of a U.S. drone, and increasingly heavy U.S. sanctions laid down on the Iranian regime.