Oil Prices this Monday on Jan 6 experienced a surge of 2%, with Brent increasing above US$70 a barrel after U.S. President Trump issued a threat to impose sanctions on Iraq amid mounting tensions with Iran in the Middle Eastern region. 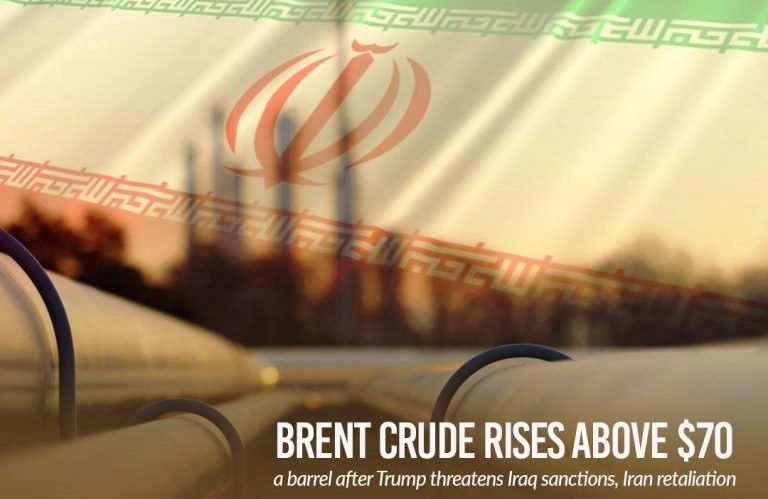 The gains long-drawn-out on Friday with more-than-3 per cent surge after a U.S. airstrike killed top Iranian general Qasem Soleimani in Baghdad. The killing has heightened concerns of conflicts across the Middle East, and it might disrupt oil supplies from a region that produces nearly half of the world’s oil production.

President Trump on Sunday has threatened to impose sanctions on Iraq after the Iraqi parliament voted in favor of calling the U.S. and its allies to withdraw their forces from the country.

Trump administration released the statement that the United States will retaliate against Iran if Tehran were to strike back after the killing of Soleimani.

Any further response from either side can ignite the beginning of a long cycle of regional escalation with substantial risks to U.S. assets and Middle East energy infrastructure, said Ayham Kamel, an analyst at Eurasia Group.
“At least the risk of a limited war is obvious. And, it would include potential Iranian attacks on Gulf energy targets and direct naval encounters between the U.S. and Iran,” Kamel added.
Based on rising risks to oil infrastructure in the Middle East, experts anticipate oil prices in 2020 to range from US$65 to US$75 a barrel. Meanwhile, Caroline Bain, the Capital Economics analyst expressed that “Friday’s strike has all but eliminated the probability of a lifting of Iranian sanctions, which is a large downside risk to our oil price forecast.”

Escalating tensions between Iran and the U.S. have already caused unprecedented interruptions to oil markets, but so far they’ve been short-termed. Washington in the preceding years accused Tehran of sabotage attacks on supertankers and a missile and drone strike on Saudi Arabia’s Abqaiq crude-processing plant in September, which remained the largest single supply halt in the industry’s history.

The Iranian leadership has signaled that it will possibly retaliate targeting U.S. military installations and bases in the Middle East. It also expected to mobilize its network of militias across the region.
Iraq – the second-largest oil-producing country in the Organization of Petroleum Exporting Countries (OPEC) – had pumped around 4.65 million barrels a day last month. Its nearest neighbors in the region – Saudi Arabia, Iran and Kuwait – together produce about 15 million barrels a day. Most of their shipping leave the Persian Gulf by way of the Strait of Hormuz, which is a narrow waterway that Iran has threatened to shut down if a war takes place.

Closing words from the analysts of the oil industry

Last year’s rise of 23 per cent in oil could already have taken it to levels where not much room leaves for further surge, according to analysts.

“The oil market always thinks the worst, so a lot of the general risk is already priced in,” said managing director of Abu-Dhabi-based Manaar Group, Jaafar Altaie.
“Prices at US$70 a barrel assumed to be the worst-case scenario, and we witness them holding there, in between US$60-US$70, for the first quarter,” Altaie added to his statement.

The general risk to supply would be a strike on Iraq’s southern fields, Altaie said.

Christof Ruehl, a researcher on energy and policy at both Columbia and Harvard universities, told the Bloomberg television on this Sunday that Iran would likely continue to attack tankers and energy infrastructures in the region as it’s accused of having done in the recent few months.

“They’re walking a tight rope” and face counter offense if they react too strongly,” said Ruehl.