The electric vehicle companies experienced a drop in stock prices on Monday after the supposed ineffectiveness of the President’s “Build Back Better” plan that claims vital incentives for the growing industry.

On Monday, the stocks of big EV start-ups like Faraday Future, Nikola, and Lordstown Motors all fell over 7%.
Ravian Automotive, a newly public EV company, also hit a new low stock price of $88.40 Monday.
Automakers such as General Motors and Tesla – both of which would have under Build Back Better but no longer qualify for electric vehicle tax credits – also tumbled during the trading period.

Joe Biden’s plan is offering up to $12,500 per vehicle in EV incentives and it has been viewed as crucial in driving more sales in EVs, which cost far higher than the conventional internal combustion engine (ICE) cars.

Transportation officials are considering both the Build Back Better bill and the new infrastructure package as critical parts of Biden’s plan to help achieve EV sales ambition.

As per Biden, he said he wants roughly half of all vehicles sold by 2030 to be electric vehicles. That would include plug-in-hybrid EVs with EV batteries and traditional ICPs.

Joe Manchin, the Democratic Senator of West Virginia, has effectively condemned the bill on Sunday, stating he would not give a vote of favor in the 50-50 Senate.

The Build Back Better allocated an EV incentive of $7500 tax credit to buy a plug-in-electric car as well as $500 if the car’s battery is manufactured in the United States. An extra $4,500 tax credit will be given if the car is assembled locally with union labor. This has ignited serious criticism from non-Detroit car manufacturers whose U.S. workers are not organized.

Here you can take a look at various EV companies as well as Tesla and legacy automakers Ford Motor and GM, both of which have claimed heavy investments in electric cars. 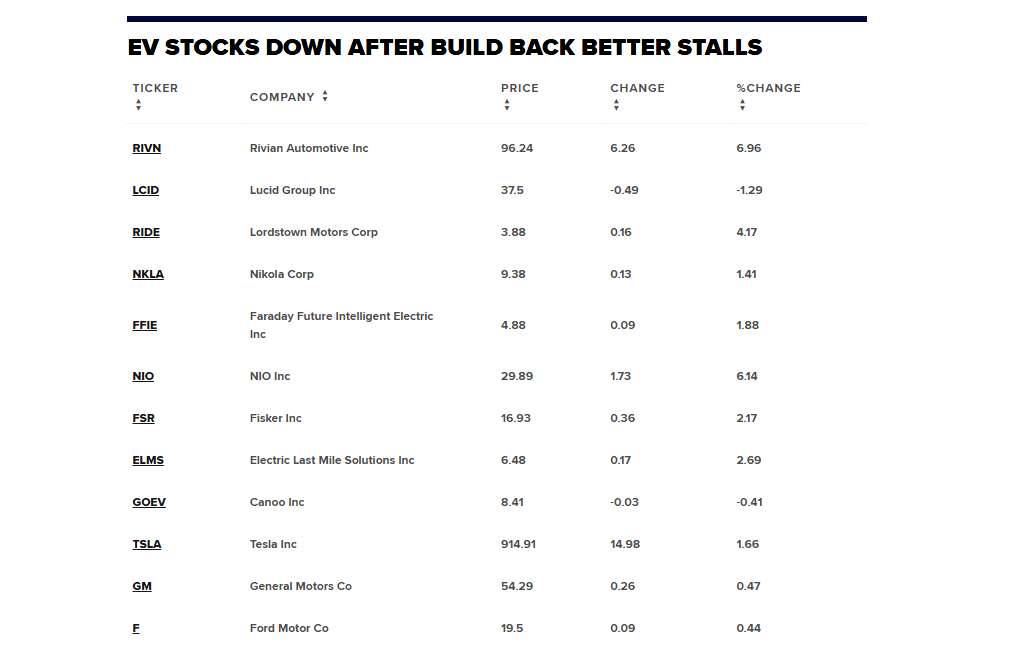